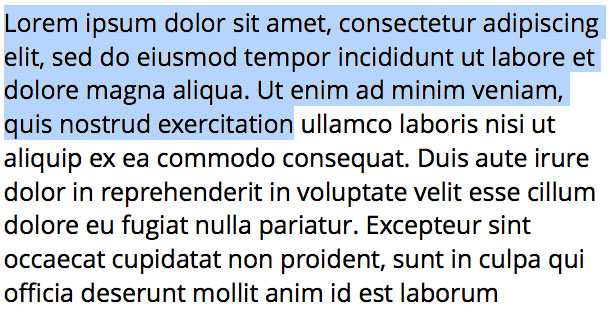 With each new version of OS X, working with text becomes easier and faster. Here are a few of the time-saving tips I’ve picked up using OS X Mavericks and Yosemite.

Double-click a word to select it, then shift-click any part of another word to select everything between the two. This is useful as it doesn’t require the accuracy of clicking exactly at the end of the word but only after a double-click.

Triple-click a word to select the entire paragraph.

Moving the cursor around

Using keyboard shortcuts is a great way of speeding up operations on the computer, no more waving the mouse in a circle to find your pointer then laboriously moving between different menu items. If only that applied to moving the cursor when editing text.

You can use the arrow keys to move the cursor but only one character or line at a time. If you hold down the alt (sometimes called option) or cmd modifier keys you can jump the cursor over much greater distances while still retaining accuracy.